Eagles to play Clearwater in sectional on Monday

Yes, baseball games between Brentwood High School and Maplewood-Richmond Heights are usually close and exciting. And yes, the Eagles routed the Blue Devils by an unexciting score of 12-2 in the Class 3 District 4 championship on May 19 at Brentwood Park. But don’t try to tell Brentwood players that the game was anticlimactic.

When in the sixth inning Mike Mills singled to score Stephen Suntrup and end the game due to the 10-run mercy rule, the mob of Eagles who rushed out to meet him at first base wouldn’t have described the scene as “anticlimactic.” Nor would the student cheering section that rushed out to join them.

“It feels great,” said senior first baseman Morgan Murphy. “There are no words to explain it.”

“It just feels good because we’ve been beaten by them the past two years,” said junior Skylar Sappington.

“To work my butt off all three years and to come out here and finally stick it to them is good,” said Mills.

“I was happy for Mike as a senior,” said junior shortstop John Bischoff, minutes after being tackled by an ecstatic classmate. “I mean, they all [MRH players] don’t like him, so him hitting that walk-off to mercy rule, that was exciting to watch, and he was excited, and it’s fun seeing my best bud like that on the field all excited.”

Brentwood, 13-5, is a district champion for the first time in three years and the fourth time in 22 years. The win puts them in the sweet 16 sectional with Clearwater High School, 16-7, located 160 miles south in Piedmont. The teams will play at 5 p.m. Monday at Brentwood Park. Admission is $6. 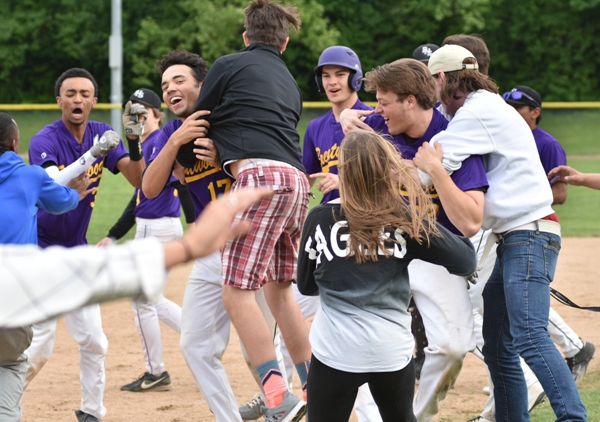 Brentwood’s victory over Maplewood on April 25 ended up being a big help in the district tournament. It resulted in the Eagles being the No. 1 seed, facing No. 4 Carnahan in the semifinal, while No. 2 MRH opened against a better team in No. 3 Hancock. The Blue Devils were forced to use arguably their best pitcher, Drew Curtis, against Hancock, while BHS saved its top thrower, Sappington, for the title game. Curtis had allowed Brentwood only one earned run in seven innings on April 25.

Sappington had a great game, allowing just three hits and no earned runs in six innings, walking three and striking out five. The losing pitcher, hindered by his team’s four errors, was Chris Tronicek.

“It gave me a lot of confidence knowing I had pitched against them before,” said Sappington. “I kind of knew pretty much everyone in their lineup and how to pitch to them.”

Brentwood took a 2-0 lead in the third inning when Bischoff tripled to score Sappington and came home on a passed ball at home plate.

MRH nearly scored in the fourth but third baseman Charles “Butters” Jones fielded a chopper and threw out Tronicek at home plate.

The Eagles pushed it to 5-0 in the fourth. Alex Cobb doubled and scored on Winkleman’s base hit. Lucas Tilton flew home on another passed ball. And Winkleman made it 5-0 on Mills’s base hit.

In the fifth, BHS made another big defensive play. Catcher Stephen Suntrup chased a third-strike pitch to the backstop, turned and threw out the runner at first base.

Aided by two Brentwood throwing errors, Maplewood scored twice in the sixth inning to make it 5-2. It was almost worse. With two outs and runners at the corners, Bischoff fielded a grounder and threw to first. The throw was late but Murphy fired a rocket home where catcher Stephen Suntrup tagged out Riley Sporleder to end the inning.

Imergoot acknowledged the two errors but added that, overall, “Our defense was just stellar today.”

But just as the Maplewood crowd started to make noise with the two-run sixth, Brentwood exploded for seven runs in the bottom of the inning to end the game. The damage was done by Bischoff’s and Sappington’s two-run singles, Suntrup’s one-run single, a passed ball and Mills’s game-ending base hit to score Suntrup.

“I’m very happy for the kids,” said Imergoot. “They worked hard and it showed. This is one of the better games they’ve played. I told them to enjoy the next two days. Saturday we’ll get back at it with practice, then [the game on] Monday afternoon.”

Brentwood scored six runs in the first inning to put it away. Winkleman pitched all six, giving up two hits and no earned runs and striking out 10. And he hit a double.

“It was my first varsity double,” he said. “I was kind of surprised I hit it. But I’ve just been getting better this season as a hitter.”
Bischoff hit a two-run homer to center field in the second.

“I wasn’t trying to hit one,” said Bischoff. “I just got my pitch and put the best swing I could and it happened for me. I’ve been 0 for something for a while in these past few games. I’m finally starting to figure it out in the end of the season, which is kind of good.”