BHS is 0-2 vs. Current but both games were close

The Brentwood High School boys soccer team ended its regular season last week with a 9-11 record and, for the third year in a row, a third-place finish in the South Central AA Conference.

That may sound like a letdown for a team that had higher hopes back in August. Remember? Almost 40 guys came out for soccer, including the biggest senior turnout in five years, and promisingly outscored their first three opponents 18-0. Would this be the first group in years to challenge for the conference title and finish with a winning record?

But the last three weeks of September did the Eagles in conference-wise as they went 1-4 in the South Central. They rallied to win the last three but their 4-4 record couldn’t beat Crossroads’ 7-1 or Hancock’s 6-2.

Nor would Brentwood end the regular season with more wins than losses. They were 9-8 early last week but lost the last three games. They can still even it out but must win this week’s Class 1 District 2 playoffs to do so. If they can get by Crossroads at 4 p.m. Wednesday, Oct. 21, they’ll probably face Principia in the championship.

Of course, records can be misleading. Valley Park is 10-9 but has lost to BHS twice. The Eagles have simply played a tougher schedule. Nine of their 11 losses have been to Class 2 or Class 3 schools. They’ve lost to only one fellow Class 1 team (Crossroads, twice).

And Brentwood has never been blown out. In fact, they’ve outscored their opponents 37-25. They lost 3-0 to Windsor and to Liberty, both Class 3, but all nine of their remaining defeats were by one or two goals.

Said senior Alex Smoller, “We played a lot of tough teams and all of them were close games.”

“Some of the schools are so big compared to Brentwood,” said head coach Cory Grage.

But he knows the experience against bigger schools might help the Eagles this week in the district playoffs, where all the competition is Class 1. They face Crossroads after having played 15-7-1 Liberty and 11-8 Windsor.

“These are two of the three or four strongest teams we’ve seen all season,” said Grage.

The most memorable game of the season for at least several Eagles was the 1-0 victory at Bayless, the first time they’ve topped the Broncos in at least four years. With 15 seconds left, Seamus Saunders fired a pass across the middle and Joey Dreyer stabbed it in with a header.

“I threw the ball in from a little bit outside of the box,” said Saunders. “It bounced back at me and I looked at the clock and there were about 20 seconds left so I didn’t have any time to dribble. So I kicked it off the bounce, volleyed it in and Joey was there to clean it off and head it in.”

Said Dreyer, “Seamus floated it in and it was a perfect cross, it was right to me and I was just there and I headed it into the bottom left corner of the net. It barely beat the keeper.”

Said Saunders, “Everyone was going crazy. It was awesome. We’ve always lost to Bayless.”

Said Dreyer, a senior playing in his first high school season, “It was an amazing feeling. It was the best night of my life.”

Three nights later at McCluer, Quinn Evans received a diagonal pass and scored with 16 seconds left for a 1-0 victory.

Eleven seniors were recognized at halftime of the Oct. 16 Windsor game, the final home game of their high school careers.

“It’s tough to realize,” said senior Eddie Wright. “There are a lot of great memories. It’s the last time being on this field in front of the home crowd.”

Said senior Marcos Sanchez, “It hit me in the second half, the first 20 minutes, when we were fired up. When we played those 20 minutes good, that’s when it hit.”

Wright hopes he finds his scoring touch Wednesday against Crossroads. He scored 10 goals in Brentwood’s first seven games but hasn’t found the net since Sept. 22.

“It’s kind of frustrating, I’m going through a dry spell right now,” he said. “I’ve got to find that touch again. I’ve got to bring my A game against Crossroads.”

More photos from 1st half of Liberty-Wentzville game 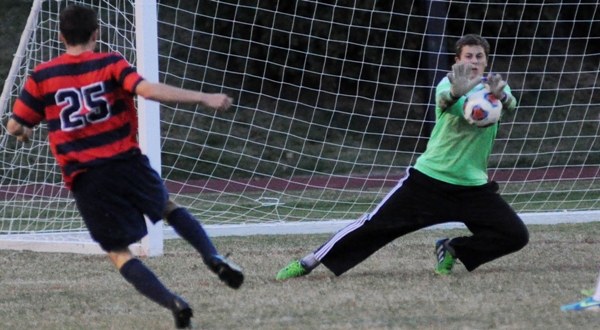 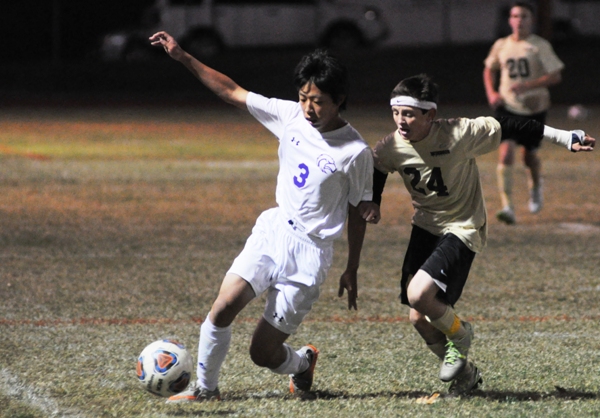