Not even 10 first-half penalties can slow BHS

Brentwood High School football teams have won 36 of their last 40 games. So far this season they’ve won all six of their games by an average margin of 47 points.

Are referees starting to feel sorry for the Eagles’ opponents? That thought might have crossed their fans’ minds on Saturday at Principia, where BHS was penalized 10 times in the first half alone. The flags flew so often, including five against Principia, that the first two 15-minute quarters lasted an astounding 1 hour and 40 minutes.

But of course one of the lessons of sports is to ignore conspiracy theories and just play so well you win anyway. Brentwood did just that, turning the lemon of a long afternoon into the lemonade of a 52-0 victory.

Coaches often get angry at players when they’re penalized a lot. But the Eagles’ coaching staff didn’t sound too upset after the Principia game. Head coach Keith Herring said a lot of the infractions were for being aggressive, and he’s okay with that.

“It was frustrating for everybody, we couldn’t get in a rhythm,” he said. “Our whole thing is we want to play fast, and we’re not going to get on them about aggressive stuff. We don’t have much control over calls so we’re not going to really worry about it. We played hard, we played fast, our kids got after it, that’s what we want out of them. Anytime we get a shutout I’m happy.”

Line coach Tom Pitcher wasn’t thrilled about having four holding penalties and an illegal block in the first half but he said it had a lot to do with the way Principia was playing.

“We don’t teach a zone blocking technique where we get our hands up,” he said. “We want to lock in with the shoulders. So when we get called that many times for holding it’s . . . hard to believe. They [Principia] were slower than we expected. We’re used to players being in front of us and they were behind us, and we were going so fast that we were reaching out.”

Offensive guard Demetrius Graves put it this way: “The officiating threw us off.”

Running back Jacob Clay had two long touchdown runs called back because of holding and still ended up gaining 225 yards and five touchdowns. He now has 1,173 yards rushing, the third year in a row he’s reached 1,000. But as he walked off the field his thoughts were about winning the final three games of the regular season and advancing through the playoffs. It bugs him that Brentwood has lost in the district semifinals the past two years.

“I just don’t want to lose again,” said Clay, a senior. “I want to get better and do something this year, so we don’t get knocked out in the second round again.”

You hear a lot of such talk this year, especially from seniors, who are eager to leave their mark.

“We’ve got to keep up the tempo, because when we get to the playoffs the teams will be a lot better than this one,” said senior offensive tackle Justin Shipley. “We’re really striving to be district champs this year.”

As usual, Brentwood rushed about four times as often as it passed, with long runs from Clay and Kaylon Jenkins making the passing game wickedly efficient. Quarterback Skylar Sappington threw nine times and completed six, half of them for touchdowns. Each of his three targets – Clay, Jenkins and Justice Harris – had a touchdown catch.

As strong as Brentwood’s running game is, Sappington believes they’ll need to pass effectively to win in the playoffs.

“We’re mixing the pass in a little more and it’s helping a lot, so we’re not so surprised when we do pass,” he said. “It helps when your running backs score touchdowns every play.” 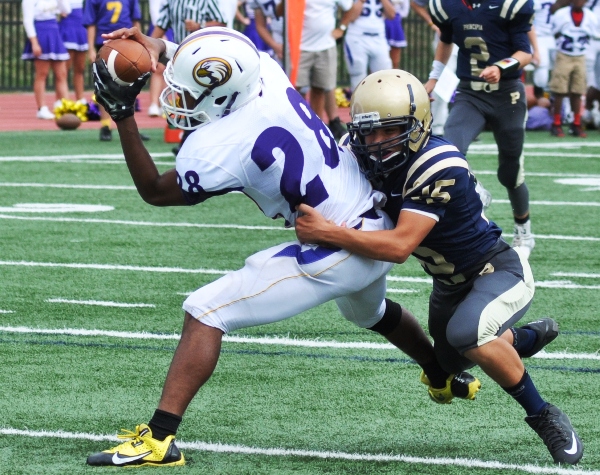 The defense was just as good as the O, with five fumble recoveries, three sacks and an interception. Brian Hutton was back after missing last week’s game and he was hungry: two sacks, two fumbles and 10 tackles/assists. He’s No. 2 in St. Louis with 12 sacks.

Harris led the team with 12 tackles/assists and one interception. He’s 14th in St. Louis in interceptions and Jenkins is fifth and the two friends are rooting for each other.

“My favorite play of the game was Justice Harris’s pick,” said Jenkins. “Me and Justice support each other in getting interceptions. Whenever he gets one I really like it because he’s kind of cool.”

Brentwood: Jacob Clay 36-yard pass from Sappington; Bax kick
Score: 33-0, 8:55
Key plays: On Principia’s previous possession, Corey Carroll’s tackle on third down to force a punt.
Sappington: “I knew Jacob was going long and could beat the corner but the corner ended up staying up and he just beat the safety down the field and they didn’t have enough time to make a play.”

Brentwood: Justin Shipley fumble recovery in end zone after Jenkins 3-yard run; kick failed
Score: 46-0, 0:12
Key plays: On Principia’s previous possession, Demetrius Graves’s and Luke Tilton’s tackle for a loss on third down to force a field goal attempt, which Jordon Tate blocked and Hutton recovered; Jacob Clay’s 10-yard run; Sappington’s pass to Justice Harris for 32-yard gain.
Harris: “It was a fly route. I was supposed to swing to the outside and cut upfield, but there was a lineman right over me and I couldn’t get outside of him so I just kind of went up the seam and I was wide open for a little minute.”