The Brentwood Recreation Center reopened to the public on Saturday after being closed for five months of renovation. About 100 people attended a ribbon-cutting at 10:30 a.m. and dozens more arrived over the next several hours to tour the community center and ice rink.

The ribbon was cut by former Mayor Pat Kelly after a short speech by his successor Chris Thornton.

The $7.68 renovation project includes architectural and construction management services for a new roof, new mechanical, electrical and sprinkler systems, ADA improvements, new furniture, a new dasher board around the rink and other improvements.

“This has been five months of construction, three months of design, two or three months of discussion of getting Chiodini Architects on board,” said Brentwood Parks and Recreation Superintendent Eric Gruenenfelder. “We’ve been talking about this at least since I started working for Brentwood two-and-a-half years ago.”

Gruenenfelder said he and his staff worked all night Friday and until 2 a.m. Saturday on finishing touches for the grand opening, mostly on “making sure the ice was ready for today.”

Said City of Brentwood Project Manager Ben von Harz, “At 2:30 a.m. we were out there making ice. It takes a few days to get the ice made.”

Both Gruenenfelder and von Harz said their favorite feature of the building is its front entrance.

“I love the new exterior and how this building looks — the presence we have from Brentwood Boulevard with the new courtyard,” said Gruenenfelder. “All the landscaping, the sidewalk, the planters. We had to correct some ADA accessibility issues, which gave us the opportunity to do this wonderful courtyard.”

Said von Harz, “It turned out to be a beautiful building. I personally like the outside features the best. The new look is nice and peaceful.” 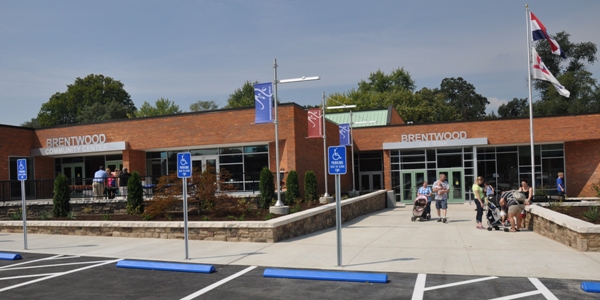 Gruenenfelder described a few of the improvements inside. The rink has a new refrigeration system, enlarged locker rooms, new dashboards and heated bleachers. So that handicapped sled-hockey players can watch the action on the ice, Plexiglas windows have been installed in some of the dashboards. It’s the only rink in St. Louis with such windows, said Gruenenfelder.

An orange “look-up” line in the ice, around the perimeter, alerts young hockey players that the dashboards are near.

“It’s supposed to get them to get their heads up so they don’t run into the boards headfirst,” explained Gruenenfelder. “The theory is to reduce head and spinal injuries.”

While Brentwood residents toured the facilities on Saturday about 100 young hockey players were on the new ice for the first time. They play in a six-and-under program for two teams: the St. Louis Rockets and the Chesterfield Falcons.

“It’s well lit and everything is done really well,” said Kevin Cunneen, a father of a player.

In the community center, all the meeting rooms have undergone changes. One of the rooms has a new “demonstration kitchen” with an island counter and a stove. The lobby has new furniture and décor. The hallways are decorated with large black and white photos of historic Brentwood.

“For the next couple of weeks we’ve still got a few punch-list items to complete behind the scenes,” he said. “Some touch-up painting, a few behind-the-scenes electrical finish-ups. I just need a nap now.”